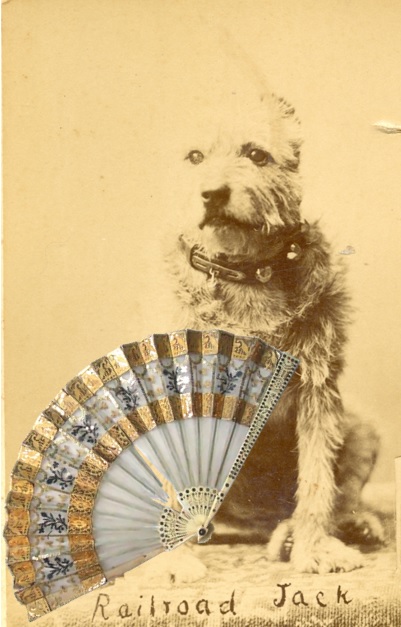 It’s going to be an oppressively hot weekend in New York. All of the local news outlets and SPCAs are warning people to be especially mindful of their pets’ health in these extreme temperatures. That got me thinking about how Railroad Jack and Owney would have dealt with the heat in an era long before the modern comforts of air conditioning. I went back into my notes to see what references I had to Jack and Owney beating the summer heat.

Jack and Owney both traveled extensively during the summer months throughout their respective careers. There are no references to them becoming dangerously overheated, but there are multiple reports of them either seeking or being sent to cooler locations. In July 1890, Jack retreated to Saratoga and the Adirondack Mountains. He cooled off by riding a horse on the merry-go-round. In 1893, Owney found his own summer mountain getaway in the Berkshires.

Reporters blamed the hot weather for the fact that Owney staying home for an extended period in late June 1893. In 1892, a Peekskill, NY newspaper claimed Railroad Jack (it was probably actually Owney, however) refused to be interviewed because the “weather was too excessively hot.”

Heat was a concern when it came to the dogs’ health. When Jack died on June 13, 1893, some commentators claimed the heat was one of the factors contributing to his demise. In New Orleans, Owney’s newspaper friends noted that he seemed to enjoy a visit in February more than when he last came in June.

Weather hasn’t been something I’ve considered a lot in my research so far, but writing this out, it does seem like a factor I should pay more attention to. These dogs both traveled through multiple climate zones, not to mention just the impact normal seasonal weather swings would have on them in their native Albany. Can anyone recommend any good books or articles that consider the weather’s impact on people and animals (hi, environmental historian friends, this request is for you!)?