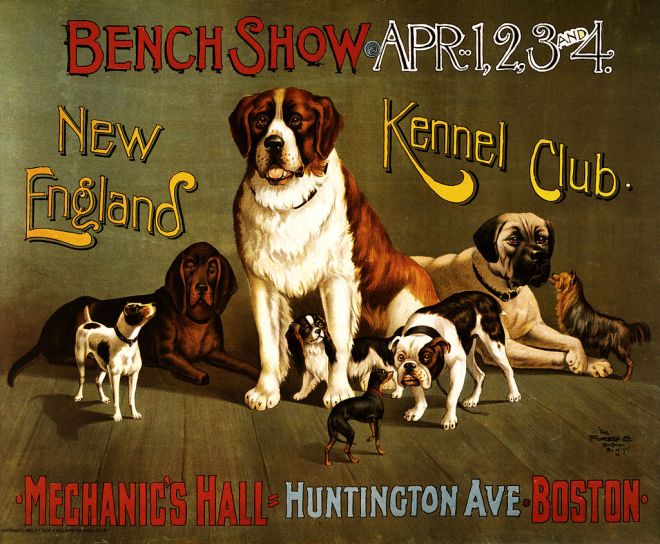 The 142nd Westminster Kennel Club Dog Show is coming up, so I’ve been thinking about dog show history. Since their inception in the late 19th century, dog shows have been a celebration of purebreds and a space where there has been no room for dogs of questionable lineage. There have, however, been some exceptions. Both Railroad Jack and his rival Owney, terrier mutts of indeterminate pedigree, were featured at dog shows throughout their lives.

Jack’s first was the Albany Kennel Club show in March 1889, where he was given a fancy silver collar and his own special bench from which he could lord over the better bred, but far less famous show competitors. Soon after, all of the regional dog shows wanted to book an appearance by Jack. In April 1889, he was a guest at the Boston show, where the Boston Globe described him as follows: ” He is a dog, and an ill-looking one at that.” Perhaps offended by such slights, Jack boarded a train and left town. He reached Cincinnati before being found and sent back.

Later that year, well-known dog show judge T.J. Farley took Jack on a dog show excursion, bringing him to the Toledo and Toronto shows. He once again escaped and the press applauded his dedication to the open road.

As Jack became old and infirm and after he died in 1893, Owney took up the dog show mantle. Owney attended the April 1893 Los Angeles dog show and the Pacific Kennel Club show in San Francisco that May. In San Francisco, Owney granted an “interview” with the San Francisco Call, in which he shared his thoughts on dog showing:

“I know I’m no beauty,” he growled, “and what is more I don’t want to be one either. I’d rather have fun with the mail boys on an express train than have a lot of women folks fooling with me all day. Dese hightoned, milk and water dogs make me sick with their stuck up airs.”

Owney’s last dog shows before his death in June 1897 were the Mascoutah Kennel Club show in Chicago in March 1897 and the St. Louis Bench Show in May 1897. Luckily for Owney at the St. Louis show, reporters didn’t think he was the ugliest dog there, despite his mutt status. That (dis)honor went to Terrienne, a Russian terrier. The St. Louis Post-Dispatch wrote, “Owney is the only dog in the show that approaches Terrienne in ugliness. There is a bond of sympathy between the Russian exile and the one-eyed tramp, but Terrienne has declared war on society as she found it.”

In my book, I’m planning to further explore what all of this means in the context of dog showing and breeding history and eugenics movements. Dog showing was a sport of the upper classes and there is something symbolically important about two working class heroes and mutts not only infiltrating the shows, but being showered with special prizes and accolades.